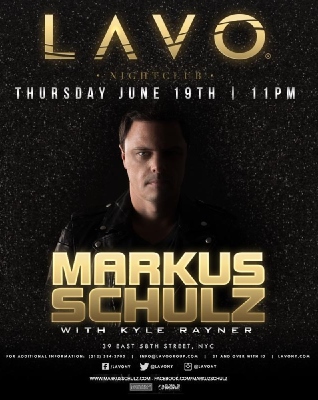 Thursday June 19th went on as any other. Congratulations for making it past hump day and “one more days” wishes all over social media. However, for a few of us, the excitement was a much greater than the impending Friday that most were abuzz about. Markus Schulz was in NYC once again, and tonight he’d be at the uber posh nightclub, Lavo. Known for its strict doors, many people were on the fence as to whether or not they should even try, but the hard core Markus fans had no question in their minds. Tonight was a Schulz night, no matter what it took to get in.

For a Thursday night the club was packed, but I have a feeling this is not new to Lavo. They often throw big names on their roster on Thursdays, and judging by the “who’s Markus” at the door- the venue is packed with or without a big name. Normally, as stated above, entry is not guaranteed here so many get in line early in their very best, and pray. Tonight, though, I think they changed their minds. If you were willing to wait in the lines (or pile) then you would, sooner or later get in. (Disclaimer for future events: if you’re not in the group by 11pm- don’t plan on getting in until after 1am- so take your chances if you must.)

Once inside, you were greeted with quite the crowd, the dance floor was packed from the minute the venue opened until the minute they closed. No rest for the weary- but what Schulz fanatic agrees to a title of “weary” anyway?

The opener was very electro and commercial and the crowd loved every moment of it. This reviewer did not hate it, but being there for Markus did make me anxious. No matter who opens for Markus, though, I am always anxious for Mr. Schulz to take stage. Slowly we all came to the realization that the man who was now fiddling with wires and screens was Markus, and you could easily point out every true Schulz fan in the crowd. Bodies stopped, smiles grew and you could cut the tensions of excitement with a knife. That’s not to say the crowd stopped loving the opener, it was just very evident who was there for Markus and who was there because it was Lavo.

Quickly, in a smooth and underrated fashion, Markus took over the decks. He went right into Coldharbour and Scream 2 tunes- making this girl rerun every challenge that presented itself earlier in her mind and think- “Worth It!”. Opening with a remix of Coldplay, I was immediately content. After about three songs in he threw in some big room, which we all know happens- and quite frankly, when Markus does it, I like it. (We all know how I feel about this particular artist, but no this is not a bias comment- I truly enjoy bouncing around and I am an equal opportunity bouncer.) Then he drops Apache and the Schulz fans went ballistic. I, personally, wasn’t expecting these great tunes so early in the set, so the play was a happily received surprise. The crowd seemed very into every song that he played, but, it was very evident throughout the entire set who knew who he was and who didn’t. I believe this is the type of thing that upsets some of the “purists”. It’s a frustration that don’t understand. As a self-proclaimed (ok I think everyone else proclaims it too) Markus enthusiast, I find huge joy in watching people hear Markus for the first time. I love the thought that a new fan was born. Therefore, seeing a very large group of people get to experience him this particular night for their first time, makes me almost as excited as the music itself! I found myself people watching more than DJ watching at one point. I love watching the DJs excitement and facial expressions, I love when the DJ looks in the crowd and finds the energy coming back. I don’t understand why some DJs question why we like to watch them. It’s not much different than when they take a moment to watch us. That spark of excitement in their eyes, the visual acceptance of their own job well done. And of course, that moment (which doesn’t happen often but sometimes…) when the artist sees its time to change pace. To watch that all unfold on the DJs face, as well as the crowds- it’s like an emotional movie. There’s nothing better! Tonight I watched as faces went from confused, to happy, to truly just listening to the music. Some people had a harder time than others getting into the tunes. I think that might possibly have been because they would hear a good “commercial” tune that they knew- freak out to it then be met with a new song they had never heard. I think a lot of these people are used to the same music, over and over again, and they know what to expect, and I think they like that. However, tonight, I saw as they started to accept something new. By the end of Markus’ set, those same people were none stop dancing and jumping and “boots and pants”ing along. It makes me wonder if these guys had been blessed with a longer say four hour set, who would come out as new Markus devotee as well? I truly believe at least 60% of that “new to Markus” crowd.

Markus quickly wrapped up his set, and before I knew it the very energetic closer was on. Back to the music that clearly everyone who normally comes to Lavo expects. It was then that I decided to take a break, another thing I love is to go outside and chat with fans and get everyone’s opinions on the night, Make sure I’m reading everyone correctly. Tonight was on point, as the people I found outside were all new to Markus Schulz, and every single one of them was raving. Many kept asking where he’d be next, a lot asked if he is in NY often so they can put it in their phones. And every single one of them took down his info and became a FB fan.

Truth is, everyone has their own preferences for venues, and for artists. But it’s nights like this, when you go outside of your personal norm, to hear some music that you know will make you happy, that really make a difference. I left the venue with renewed appreciation for many things, and as always, with more excitement for the next show. It’s not just about the music. It’s about you, your friends, the new friends you will make, and all the fans that will be there. And yes, it’s about the DJ and the music, and how they bring all of those things together to make one big happy family. This night was short on none of that.

Huge thank you to Markus, to the venue staff and to ENL for letting me be part in this, and share my experience with the world! Looking forward to the next big Markus adventure!

‘We Are The Light’ Now On Full Release; Markus Schulz Talks About The Inspirations Behind His New Album